Sam Ke Ting's lawyer had applied for stay of execution but was rejected by the High Court.

I think we have to be fair to the learned High Court  judge before criticising him of being cruel.

Sam Ke Ting's case started in the magistrates court. So leave to appeal ( kebenaran merayu) has to be obtained before she can file an appeal to the Court of Appeal.

(Section 50(2) of the Court Of Judicature Act 1964)
Stay of execution should only be granted when the Appellant can show special circumstances pending appeal. Here, there is no appeal until she can get leave( permission) from the Court of Appeal.
IMHO, that's the reason why the High Court judge had rejected her lawyer's application to stay the jail sentence.

Please note that unlike her case, Najib's case was not heard in Magistrates court so the law applicable is different. 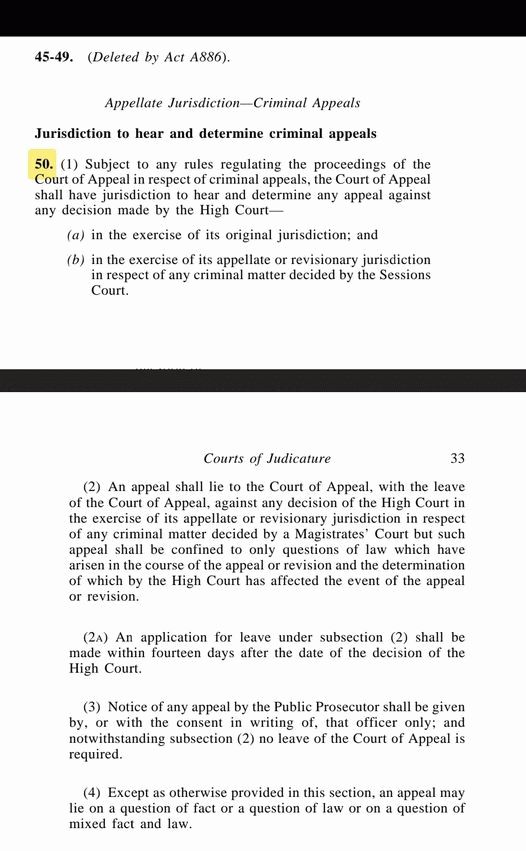 More than 250,000 signatures have been collected in less than 24 hours on two separate online petitions seeking either the release of or justice for Sam Ke Ting, the woman who was yesterday sentenced to six years’ jail over the 2017 deaths of eight teenagers riding their “basikal lajak” or modified bicycles in Johor.

The High Court in Johor Baru had yesterday reversed the previous acquittal of Sam over a reckless driving charge over her crashing into the eight teenagers at 3.20am in 2017, sentencing her to imprisonment without allowing bail and also to a RM6,000 fine and three-year driving ban upon completion of her prison term.
2 found this helpful
Helpful

JOHOR BARU, April 14 — Sam Ke Ting, the driver who crashed into eight teenagers riding modified bicycles on a dark road and killing them in 2017, has filed an appeal against the High Court's conviction and six-year jail sentence and RM6,000 fine yesterday.

Her lawyer Muhammad Faizal Mokhtar confirmed today that the filing was made to the Court of Appeal in Putrajaya.

He said a certificate of urgency to expedite hearing of Sam's appeal has also been filed.

“Both the notice of motion for leave to appeal and to stay the execution of her sentence were filed today through the court’s e-filing system.

“The certificate of urgency was also filed today,” he told Malay Mail when contacted this afternoon.
It is understood that Sam is under police custody and will be transferred to the women’s wing of the Kluang Prison in Johor today following her sentencing.

In meting out Sam's sentence yesterday, the High Court also ordered the 27-year-old clerk to serve an extra six months in prison if she fails to pay the RM6,000 fine.

The High Court said she is barred from driving for three years.
Muhammad Faizal had asked the court for a stay of execution since as he planned to file an appeal but

High Court judge Abu Bakar Katar rejected the request and instructed Sam to start her sentence today.
Sam’s case started at the Magistrate’s Court before it was appealed to the High Court.

Sam had previously been acquitted of reckless driving by the Magistrate's Court here on October 10 last year.

Based on the charge sheet, Sam was accused of driving a car with the registration number JQB 9984 along Jalan Lingkaran Dalam in a reckless or dangerous manner, resulting in the death of eight cyclists at 3.20am.
2 found this helpful
Helpful 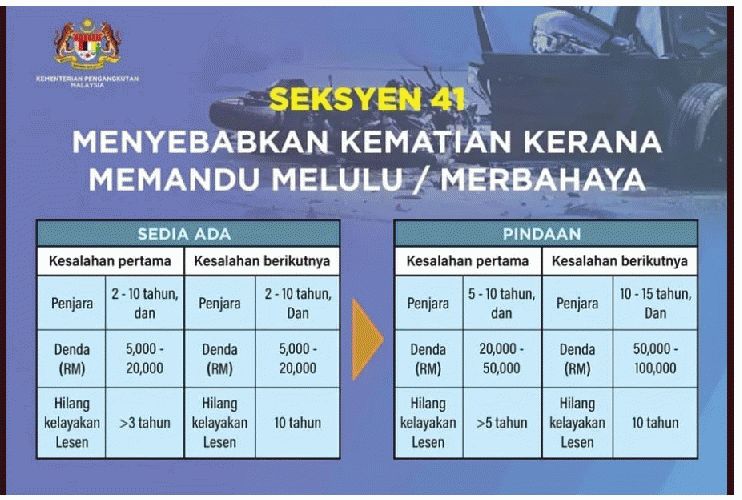 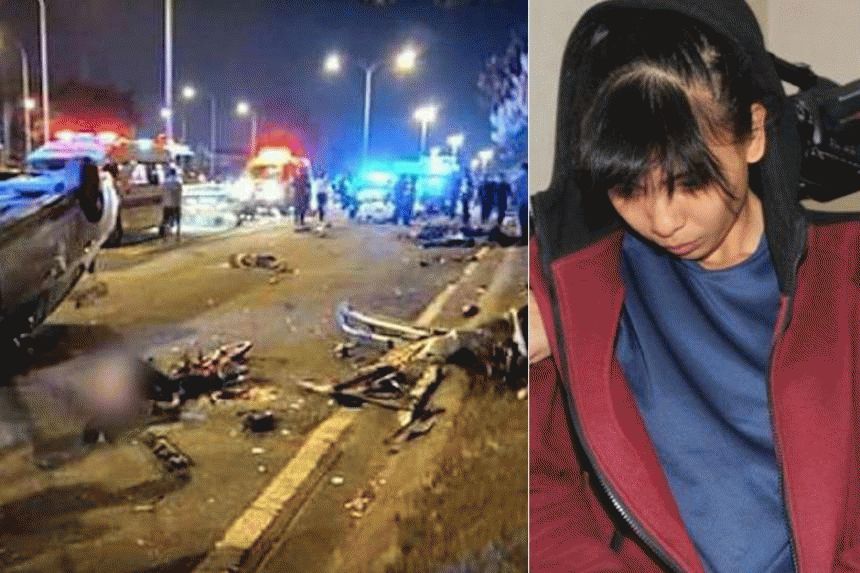 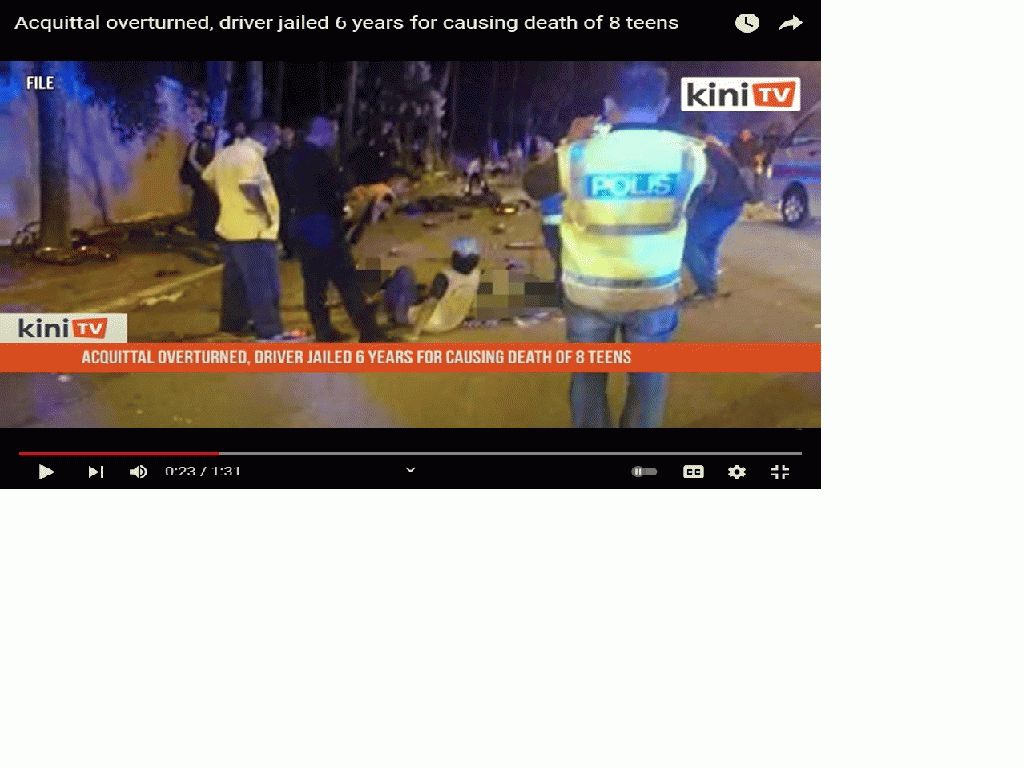 NOTE : NO DISCUSSION PLEASE
THE CASE IS UNDER APPEAL AT C.O.A.
2 found this helpful
Helpful

answered on Apr 15, 2022 at 15:25
by
Vince Sum
@ Jeff - latest info - in her unsworn defence she claimed another car hit those kids not hers.
0 found this helpful
Helpful

Feb 18, 2017: Sam Ke Ting, then 22, crashed into a group of teenagers riding modified bicycles without brakes on a public road in Johor Baru at 3.20am.

March 2017: Sam was charged with reckless driving and causing the deaths of teenagers under Section 41 (1) of the Road Transport Act 1987.

Oct 2019: She was acquitted by a Magistrate's Court without being called to enter her defence.

Feb 2021: The prosecution appealed to the High Court, which ruled that the prosecution had established a prima facie case and that Sam should enter her defence.

The prosecution appealed to the High Court.

April 13, 2022: The High Court overturned the Magistrate Court's decision, sentencing Sam to six years in prison and a fine of RM6,000. She was denied bail and had to start serving her sentence immediately.
1 found this helpful
Helpful

My purpose is NOT to be a Judge, Jury or Executioner of this case.

It is the Court Judgment that i,m interested in.

The "bumper" (or appears to be) is lying in the foreground amidst the carnage of ALL the collisions.

How did the car overturned, the vdos shown have bright streetlights, the roads does not have evidences of "potholes" which can caused the car to overturn, there are about 15-20 “basikal lajak” riders found at the scene (some may have panicked and ran away). Are all these teenagers (minors) blind to the fact that there is another car? Or they have been taught to lie to the I.O.s collectively as a group? Surely these teenagers would want justice for their friends.. right?

What I had highlighted is the process where the possibility of her lawyer has failed to protect her "interests" in the event she is convicted during this hearing. The lawyer is sure to be aware that this is an appeal from the lower court to the High Court, then proactive actions have to done with "prepared docs" to seek leave to appeal (should there be a conviction) in the C.O.A. immediately after the trial.

On the other hand, I am interested in whether the Honorable Judge has err... which I found to be sound, consistent with the laws stated. Although it is harsh that bail is not allowed, which is within the Jurisdiction of the Judge.

On the other hand, my personal opinion is that the Judge, in disallowing bail may have the intention to protect her under Police Custody as this accident / Judgment may run along lines of racial disharmony. At such a young age, she may panic and/or abscond, making the racial issues more prominent.

Let's not be Judgmental and learn the court process instead, to educate ourselves here for our own knowledge and benefits.
2 found this helpful
Helpful

Why only raise the story about the other car hitting the kids NOW when your defense is called?

why absolutely no mention about the other car at all since day 1 or even at the majistrate court when she was freed ...

And more importantly why unsworn statement , instead of statement in the dock where she can be crossed examined by the prosecution?
0 found this helpful
Helpful

The defense can be via filings and evidences of medical tests conducted on her. Maybe there was no "cross-examination" of her at all. Without any docs, we will not know of "what actually happened" at the trials at the Magistrate Courts.

What we here learn is mostly on High Court Cases on Bkcy issues, but this case is of "Criminal Charges" which one of the penalty is Jail Term. Hence really requires the services of a competent lawyer specializes in criminal cases.

What ever happens to her down the road, the burden of guilt and remorse of 8 teenagers dying in her hands would grief her for the rest of her life esp when she has children of her own.

"unsworn statement" is not admissible in a Trial Court Proceedings (my personal opinion). That is why all affidavits filed in court needs to be certified by a Commissioner of Oaths.
2 found this helpful
Helpful

Topic : Unsworn Statements from the dock

APRIL 16 — More than 250,000 signatures have reportedly been collected in less than 24 hours on two separate online petitions seeking either the release of or justice for Sam Ke Ting, the woman who was sentenced to six years’ jail over the 2017 deaths of eight teenagers riding their “basikal lajak” or modified bicycles in Johor.

According to latest reports, the largest of the petitions has over 800,000 supporters.
Now, the High Court Judge Datuk Abu Bakar Katar on April 13 ruled that the Magistrate’s Court had erred in failing to decide the accused’s defence without being under oath.

The learned judge’s grounds of judgment have been sighted and reported by Malaysiakini.

Lawyers will tell you that the accused had given an unsworn statement from the dock.

The trial court is free to give the dock statement the weight it deserves or not at all, having regard to the whole evidence before the court.

A few years back in 2016, in the case of Zulkipli Abdullah v Public Prosecutor [2016] MLJU 299, the Court of Appeal had the occasion to consider the evidential value of the dock statement. It was observed as follows:

“The accused gave an unsworn statement from the dock. His statement is not subject to cross-examination by the prosecution, nor can he be questioned by the trial judge. Its veracity is not tested. The trial judge is free to give the dock statement such weight as he thinks fit and he can take it into consideration in deciding whether the prosecution has proved its case.

In that case (Dato’ Seri Anwar Ibrahim v Public Prosecutor & Another Appeal) the Federal Court went on to say as follow:

Thus, where the prosecution has made out a case, a mere denial through a statement from the dock does not in effect raise any reasonable doubt on the prosecution’s case.

This explains why the learned High Court judge ruled as follows (in Malay):

“Reasonable doubt is the doubt which makes you hesitate as to the correctness of the conclusion which you reach. If under your oaths and upon your consciences, after you have fully investigated the evidence and compared it in all its parts, you say to yourself I doubt if he is guilty, then it is a reasonable doubt.

“It is a doubt which settles in your judgment and finds a resting place there.

“Or as sometimes said, it must be a doubt so solemn and substantial as to produce in the minds of the jurors some uncertainty as to the verdict to be given.

“A reasonable doubt must be a doubt arising from the evidence or want of evidence and cannot be an imaginary doubt or conjecture unrelated to evidence.”

In that case, Justice Zulkifli Bakar ruled that the defence raised by the accused, who gave an unsworn statement from the dock, was a mere denial that failed to raise any reasonable doubt on the prosecution case.

The cases above show that not much weight is to be given to what an accused has said in his unsworn statement.

* This is the personal opinion of the writer or publication and does not necessarily represent the views of Malay Mail.
2 found this helpful
Helpful

"Part of the Judgment"

This explains why the learned High Court judge ruled as follows (in Malay):

In that case, Justice Zulkifli Bakar ruled that the defence raised by the accused (Sam Ke Ting), who gave an unsworn statement from the dock, was a mere denial that failed to raise any reasonable doubt on the prosecution case.
2 found this helpful
Helpful