918 Views  ⚫  Asked 7 Months Ago
asked on Jan 31, 2022 at 09:29
by
Arty Party
Hello everyone, I am in need of advice. I'll try to make it as short as possible. I was reading through some Lawyerment Answers posts to try understand but I guess I need to ask for advice also.
Note: Main information stated as plain sentences, additional information in brackets to help understanding the situation). I tried to make this as short as possible. If I have any additional information, I'll notify.

answered on Jan 31, 2022 at 23:22
by
jeff005
Please stop doing reckless actions like writing emails to your creditors. Laws and debts have no sympathy nor compassion.

It amounts to admission to whatever the creditors claims and it voids the protection under the 6 years limitation act.

If you want to get out of this mess which is self created, you can find a holistic way of resolving it by reading backwards this bankruptcy section for the past 2 years.
1 found this helpful
Helpful

answered on Jan 31, 2022 at 23:38
by
jeff005
What actually affects and could determine the outcome depends on your age, male or otherwise, single or divorced, have children or not, your edu level /career experience and your commitment to stand tall ever again.

Nothing bad is forever. Stress kills, you are not the first nor the last to end life. I have been down this path b4. I survived and love the simple life of the mountains and leave the mundane life of a materialistic world.

Whether the blacklisting would remain forever will depends on your current actions. You are already blacklisted same as in an insolvent state as an adjudicated bankrupt.
1 found this helpful
Helpful

answered on Feb 3, 2022 at 09:35
by
Arty Party
Hello @jeff005,
Thank you for your replies. I have been reading abit by bit. However, what is your opinion on my savings account (which currently holds my iSinar money)?
From what I read here, there is a Moratorium extending debts to RM100k as well as the multiple stages that have to be gone through before any bkcy status is given.
Should I do something (eg. withdrawing everything) you know, as a contingency plan? I really need those funds to pay for my certification exams and living costs. Should I be checking my CB also?
Thanks. 🙏
0 found this helpful
Helpful

What is the *CB* being referred to?

To be continued later...

The is n no more moratorium of 100K.
It is 100K threshold now..
It can be a combo total of all debts.
1 found this helpful
Helpful

Only BNM CCRIS is under Govt and is on banking transactions only.

It is nice of you to share your knowledge here on what is known as "3rd Party Search". Sharing of data among the 4 PCBs is a common knowledge. It can be paid search.

As a token of appreciation, here is my reciprocal reply to ur Qs : 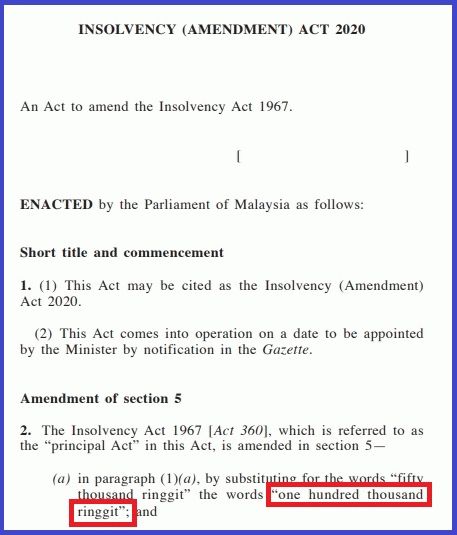 Normally once Gazetted, it will be enforced very soon.
1 found this helpful
Helpful

Conditions on which creditor may petition

5. (1) A creditor shall not be entitled to present a bankruptcy petition against a debtor unless— (a) the debt owing by the debtor to the petitioning creditor, or if two or more creditors join in the petition the aggregate amount of debts owing to the several petitioning creditors, amounts to *fifty thousand ringgit; ( *Hic.. 100,000* very soon !!!)
1 found this helpful
Helpful

The 2 smses that you u received are normally just threats from the banks DCs.

I have a small plot of land inherited at a kampung,
If it is joint owners, it is not easy for JIM to seize lelong this land.
Have the title deed been issued (with your name inside?)
If it is kampung land, are you a Malay?
And is it a "Malay Reserved Land"? If it is, even harder for JIM to act.

Nota :
Normally such msgs from DCs send to Chinese is in English.
1 found this helpful
Helpful

At certain situations, filing for Debtors Petition is more prudent;

Nota :
The accumulating interests can kill a debtor faster, there is no way to dig a hole in the ground like an ostrich to hide ur face.... !!

I have always advocate self bankruptcy if the debts is too high and the debtor is unemployed.

AND :-
A bankrupt can still apply permission from JIM to go overseas to work based on ur personal Qualifications and experiences.. (there must be official offers from overseas).

i apologize for writing in bits and pcs (still on hols mood.. hehe).
1 found this helpful
Helpful

answered on Feb 5, 2022 at 10:15
by
Arty Party
Dear @jeff005,
If I knew those sms were just taik cicak on the wall, I wouldn't be so stressed out all this while.
But I do recall sometime in 2013, I did receive a registered letter to attend a court case. However I do not know if this is real or not (as in the DC make it up) as I was very scared then. I guess although working in a bank, yet some things your trainer don't teach you..
But so far I have checked my IC at the Immigration portal and there is a "Tiada Halangan" status.
I plan to go to EPF by next week, so I would like to know if printing my Credit Bureau report trigger anything?
Anyway I am not Malay but the land itself is under all the relatives, so each portion is not that big. I was considering making it a farm, but it's not exactly fertile land, unless I do some hydroponics. Not sure if my name is in the deed, because the person managing, a "sibling" it attacked me while I was sleeping, so I can no longer trust him, and another cousin wants to manage it instead. So everyone want to talk big end up nothing done lah.. land just sitting idly like that.
As for declaring bkcy, although can get permission to go overseas, I have to deeply consider it as it does limit certain aspects.
As I recall, the last payment I made was in 2014. Does that mean the Limitation Act already kicked in? Limitation Act also applies for cc loans converted to term loans also right? It's not that I don't want to pay, but if that is the law..
If I buy number and suddenly strike jackpot RM40million then different story la..😅
Come to think of it, I am puzzled how one person's selfish act caused me so much of trouble. I still remember when I was still asleep at 9am, a DC called the house, he instead of covering for me, he called me loudly to take the call. Whereas few years before, when his payment lapsed a few months, a DC called and I picked up, i argue with the DC some more. That's the thanks I get. Man, what an attitude. This person I no longer consider as family.
Anyway are you able to advise me more? I'll probably get the EPF nomination done and sent to the EPF, then can drop by BNM. I prefer to print out hardcopy as I don't want to do a CB report online.
0 found this helpful
Helpful