Bankruptcy (Malaysia) - How does Bankruptcy affects Joint Names personal dwellings (Home/house) in the event one has been adjudged a bankrupt. 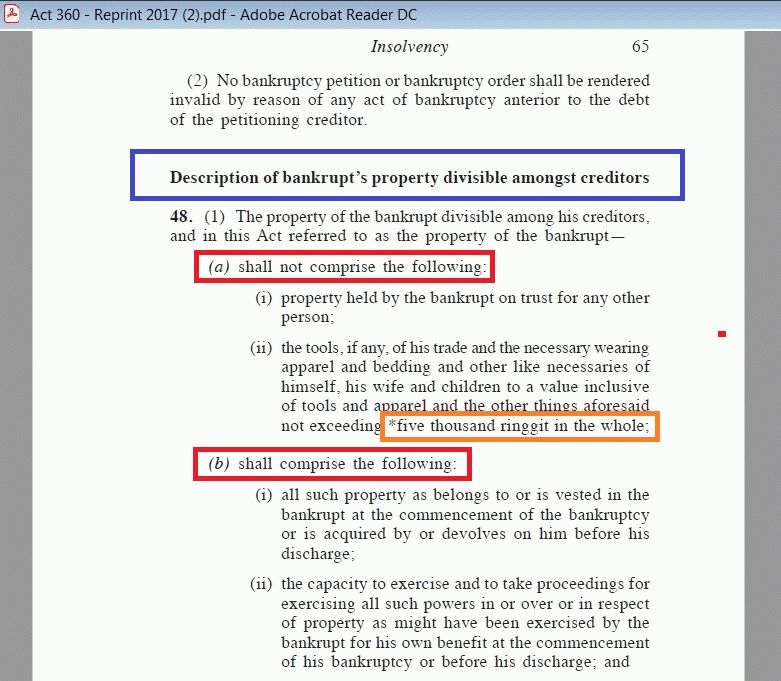 Under what conditions a bankrupt's house will not be taken away by JIM (Insolvensi), to be sold and the proceeds divided among POD Creditors?

Wife must report in to JIM asap and made declarations in her SOA (Statement Of Affairs) on her 50% ownership of the Family House but is held  (and which is paying /paid for solely by the husband) on trust  for the Family. Proof must be tendered and JIM will not take any action on this property due to the Act 360 s48 (1a)(i).

Note : The above law interpretation is personal in nature, made possible with collaboration with Puan Noralina1010  (Ref : https://www.lawyerment.com/answers/questions/13858/melawan-petisyen-kebankrapan?g=3#tab-top

(Caveat : The above article is written by a Q&A registered User. It represents a personal point of view only and not be regarded as legal advice.)
1 had this question
Me Too
0 favorites
Favorite
[ share ]
share a link to this question

For the past several years, data has consistently shown that more and more people are going bankrupt at a young age.

Between 2015 and 2019, about 85,000 Malaysians below the age of 25 were declared bankrupt, a Sinar Harian article shows.
"Five-series" loans are dangerous

According to Hijrah Wealth Management founder and consultant Rohani Mohd Shahir, the main reason for bankruptcy at a young age is the "five-series" loans: personal, education, car, home and credit card.

"All the loans combined can easily bankrupt a young person," she said at the Wacana Al-Quran Siri 8 talk titled "Bankruptcy at a Young Age" organised by Karangkraf group.

Rohani also said that when she was working in the banks in the 1980s and 1990s, it was very rare to see people below the age of 40 being declared bankrupt, but that has since changed.

"Among the reason for bankruptcy among young people are becoming guarantor for their father's cars and some who go bankrupt because they like to be stylish and own more than one credit card.

"In fact, there was a point where 11 million Malaysians had credit cards and it could be said some young people had up to five credit cards," Rohani reportedly said.

Rohani said that it was worrying to see so many young people, especially Malay youth, going bankrupt.

"I hope young people will be more aware of such statistics and not get into so much debt at such a young age that they can go bankrupt," she said.

Rohani said that it used to be that the main reason for bankruptcy was car loans but nowadays more people are facing the fate due to unpaid personal loans.

She hoped that more people will not risk taking personal loans because of financial constrains during the COVID-19 pandemic.