IM.96(C) B/B6 Stamped on my passport in Malaysia

This post is regarding the IM.96(C) B/B6 stamped on my passport in Malaysia.

I've stayed in Malaysia for 6 Months from Aug-2010 to Dec-2010. I've been there on a visit visa valid for 1 year, but each visit must not be longer than 30 days. However, I've continued my stay for 6 months with valid extensions from the immigration.

In December 2010 I came to India and went back to Malaysia, where at immigration they've stopped me and asked me to go back siting the multiple extensions on my 30 day limited visa. I agreed and they've stamped on my passport on the code "IM.96(C) B/B6 dated 13-DEC-2010" and I came back.

Now, I've been getting few offers to work abroad and I'm afraid that this stamping might effect my chances in visa application. I need to understand what this stamp on my passport mean, does it have any effect on my future visa applications to any countries and if there's any such problem please suggest what shall be done to overcome them.

I got the same stamp. Can you tell me meaning of this stamp, if you know?

I am a IT professional and travel to different countries, please tell me how it would influence further travels to other countries or Malaysia.
0 found this helpful
Helpful

33. Removal of persons unlawfully remaining in Malaysia
(1) Where the presence of any person in Malaysia is unlawful by reason of section 9, 15 or 60 the person shall, whether or not any proceedings are taken against him in respect of any offence against this Act, be removed from Malaysia by order of the Director General.

(2) Any person in respect of whom an order of removal has been made under subsection (1) may appeal to the Minister* in such manner and within such time as may be prescribed:

Provided that any person detained under this subsection who appeals under subsection 33(2) against the order of removal may, in the discretion of the Director General, be released, pending the determination of his appeal, on such conditions as to furnishing security or otherwise as the Director General may deem fit.
0 found this helpful
Helpful

Pakistani gets RM10,000 fine for overstay

Wajid, a Pakistani, pleaded guilty to overstaying in the state for five months and 26 days, on a social visit pass which expired on December 2, 2013.

Meanwhile, Shamsul, also a Pakistani arrested on the same day and place, pleaded guilty to violating his social visit pass by working as a shop assistant at the premises.

The offence under Regulation 39b under the same Act carries a fine not exceeding RM1,000 or imprisonment not exceeding six months, or both, on conviction.

The same court jailed Filipino Felinda G Gabrillo, 47, for four months after she pleaded guilty to overstaying in the state for over a year, on a social visit pass which expired on January 31, 2013.

She was caught for committing the offence on May 11 this year at around 4.30pm in Beaufort town.

In the last case, the court jailed an Indonesian, Idjil Mukasil, 46, for five months jail with one stroke of the cane, after he pleaded guilty to illegal entry into the State.

Idjil was arrested on June 2, this year at a bus stop in Inanam town around 5.30pm.
He was charged under Section 6 (1) (c) of the Act which carries a maximum fine of RM10,000 or a jail term of up to five years or both plus whipping, upon conviction.
In mitigating for a lenient sentence, Idjil claimed he has been in Sabah for about six years, and has five children to support here.

These are the frequently common offences committed by Foreigners/Immigrant/Visitor/Tourist to Malaysia.

The penalty for an offence on illegal entry:
A fine not exceeding RM10,000 or to imprisonment for a term not exceeding 5 years or both and shall also liable to whipping of not more than six strokes.
A compound of RM3,000.00

Section 15(4) Immigration Act 1959/63
Stay exceeding the expiry date/cancellation of visit pass.
The penalty for an offence on overstaying :-
A fine not exceeding RM10,000 or to imprisonment for a term not exceeding 5 years or both
A compound of RM3,000.00

As such foreign visitors are reminded to leave Malaysia before their pass expired.
3. Make, Falsify Or Amend A Document Or Endorsement
Section 55D of the Immigration Act 1959/63 (Act 155)
Penalties:
A fine of not less than RM30, 000 and imprisonment of not less than 5 years but not more than 10 years and shall also be liable to whipping of not more than 6 strokes. 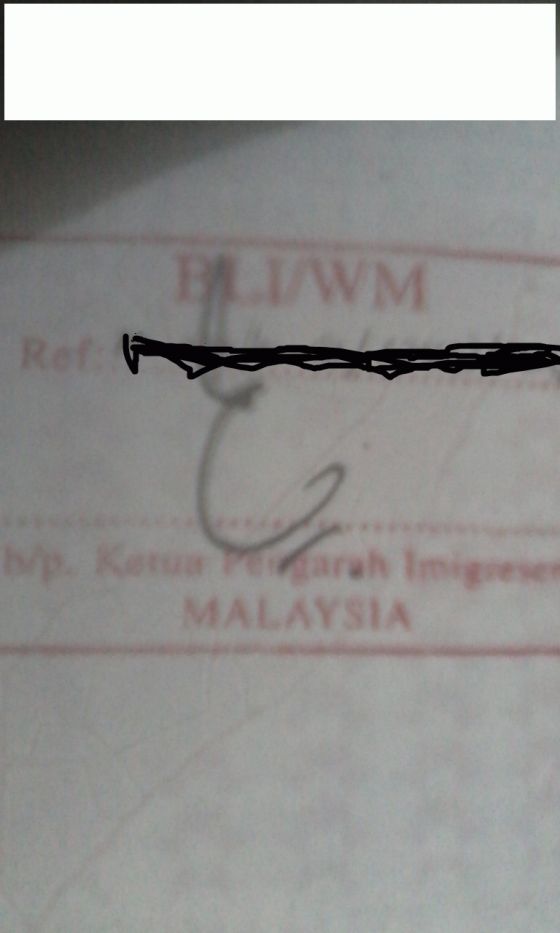 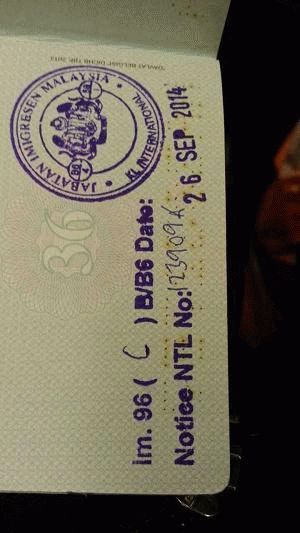 Please tell me how it would influence further travels to other countries or Malaysia.

Yours is a NTL stamp, means NOT TO LAND.

Most immigration will reduce your validity period of stay. Entering too frequently without giving reasonable excuses, other countries will also stamp NTL.
0 found this helpful
Helpful

Still awaiting to get advise how NTL stamp effects visit to other countries? This stamp made in my passport by Malaysia Immigration due to frequent travel on Business Visa, I understand I should not been traveled frequently but it was not due to lack of knowledge of immigration rules, if I could have informed in last trip, I would not have traveled again.

I am a IT professional and travel to countries in projects, Please advise me how this NTL will effect my travels in future in other countries (Like US, UK etc.) or in Malaysia too. Will other countries consider our passport as special case or it may effect other countries stamping?
0 found this helpful
Helpful

Still awaiting to get advise how NTL stamp effects visit to other countries?
This is a forum, not an international travel advisory bureau. Try TripAdvisor.

It has been answered above by some kind soul.

due to frequent travel on Business Visa,
This is Malaysia.
Malaysia do not have Business Visa
Only Thailand have non-immigrant Business Visa valid for multiple entries for 3 months only.
Malaysia has only a single entry visa for social visit and business visit.

but it was not due to lack of knowledge of immigration rules
Then suffer the consequences now.

Please advise me how this NTL will effect my travels in other countries (Like US, UK etc.)
Write to them and ask. This is Malaysia.

or in Malaysia too.
Malaysia already said NOT TO LAND. You don't understand English?

Will other countries consider our passport as special case
Under ASEAN International Travel Laws,
Other Asean Countries will start to stamp NTL one by one, for frequent inbound travel without proper supporting documents and correct applications.
0 found this helpful
Helpful

Will other countries consider our passport as special case
Yes.. Sure special case. Red Marked for possible NTL stamp.

Will other countries consider our passport as special case
Yes.. Sure special case. Red Marked for possible NTL stamp. ( Please advise more how this will effect, If I would like to travel to other countries with proper documents, still it will cause any issue in future)

I understand and would like to learn from my mistake, this happen first time & would like to make this as life time learning example and wont repeat this again. It happened due to my company mistake. But its a personal loss for me so I am very tensed and worrying for my career.

Please advise. I would appreciate your advice.
0 found this helpful
Helpful